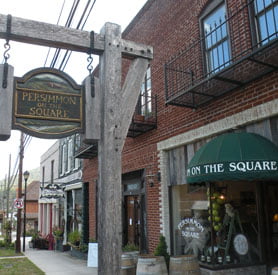 Walking Tour of Downtown Clayton
Visitors can walk to thirty-seven buildings on a self-guided tour of downtown Clayton.   Maps are available at the Rabun County Historical Society Museum as well as other locations in downtown Clayton.
Rabun County was created in 1819 when the State of Georgia dictated a treaty with the Cherokee Nation, which removed the Native Americans. The county was named for a recently deceased governor, William Rabun. The land, which had been home to the Cherokees for thousands of years before the arrival of Europeans, was given to white settlers in a land lottery.
Clayton was made the county seat in 1823, but the town was not incorporated until 1909. Clayton’s location on the ridgeline at the intersection of several creeks had been known by the Cherokee as the equivalent of the English word, “Dividings.” It was the location of the convergence of several important Cherokee trails connecting villages to the north, east and west.
Pick up your Walking Tour Map at the Rabun County Historical Society.
Free Parking, Maps & Brochures Available, Parking on Site, Public Restrooms, Self-guided Tours
Family-friendly, Free Admission , Handicapped Accessible, Open Year ‘Round
Group-friendly
All Ages
81 N. Church St.
Clayton, GA 30525
706-782-5292